THE DARK SIDE MAGAZINE (U.K.) REVIEWS

“Possibly the sickest, most perverse, serial killer in criminal history was a grey-haired old grandfather type named Albert Fish. In the late 1920's he abducted a 10-year-old girl named Grace Budd, stripped her, choked her to death, cut her body into little pieces and ate her with carrots and onions. He later said she tasted like veal. In a vile letter to the victim's mother he taunted, 'I did not fuck her, though I could have. She died a virgin.' Fish is the subject of this grimly fascinating 'docudrama' from filmmaker John Borowski. Borowski's approach is unusual. He puts us back in the days of Fish's crimes with stock footage of Depression-era America, and into the mind of this most twisted of individuals with narration taken from Fish's own confessions. The original letter written by Fish to Grace Budd's mother now resides in the 'Odditorium' of artist Joe Coleman and he appears on camera to talk about his 'Magna Carta' of serial killer memorabilia. It seems he acquired it by pure luck. The police department secretary who xeroxed it for him filed the copy and gave him the original by mistake! Steering away from overt reconstructions of Fish's horrendous crimes, Borowski delves into the killer's troubled upbringing. Placed in an orphanage after his father dropped dead, the young Fish was whipped mercilessly and came to gain sadomasochistic enjoyment from he pain.

He later became a male prostitute and practiced all kinds of perversions with both male and female clients. Even when he married and fathered six children he still indulged his sexual deviances with males on the side. But Fish was hardly ever at home. He traveled the country as a house painter. 'I always had the desire to inflict pain on others and to have others inflict pain on me,' he noted. Borowski vividly depicts Fish's fantasies of S&M sex with young male prostitutes, one of which almost resulted in the male hooker's death when he tried to cut his penis off.

At the heart of Borowski's movie is the chilling truth that psychopaths are monsters who look just like you or me. When Fish's wife ran off with another man he raised his six children dutifully. A regular churchgoer, he said grace at every meal. But in the end he paid in the electric chair for his crimes, and famously nearly short-circuited the device with the 29 needles he had stuck into his abdomen!

This is a creepy, classy documentary, which is pretty much the last word on Fish's ghastly crimes.

Extras on the DVD include interviews with the director and a real-life cannibal, plus a murder Metal Band called Macabre - who perform a song about Albert Fish! There's also a macabre history of the electric chair and deleted scenes.”

His real name was Herman Webster Mudgett and he spent his early years in strict religious study. A high achiever, he became a medical student and then a doctor and con artist. He changed his name to avoid any of his old scams catching up with him. Eventually he pitched up in Chicago at more or less the same time as Jack the Ripper was carving up Whitechapel whores. Holmes set about the construction of what came to be known as his "Castle." He was actually building an abattoir in which he could practice murder. His 'scam' this time was to sell insurance policies to people, then murder them and collect on their behalf! The Holmes story has been told in print in Robert Bloch's novel American Gothic and Erik Larson's recent Bestseller The Devil in the White City.

Borowski uses creepy black and white reconstructions of the crimes accompanied by a doomy narration by Shakespearean actor Tony Jay. As with his ALbert FIsh documentary, Borowski was 'lucky' that Holmes was a compulsive letter-writer and diary-keeper. We also get the usual array of talking heads in the shape of historians and forensic experts who describe how easy it was for Holmes to get away with mass murder in these chaotic and often lawless days. In fact when the secrets of Holmes's "Castle" were eventually revealed, no proper estimate was made of the number of victims.

Most of Holmes' killings were done during the duration of Chicago's 1893 World's Fair. He rented out rooms to tourists and then bumped them off! His murderous method was simple. He ran hidden gas pipes into the rooms and just turned them on when the inhabitant was asleep. One could argue that Holmes was not a serial killer in the classic sense because most of his murders were done for profit rather than perverse sexual pleasure. Director Borowski doesn't offer up any great psychological insights here, but he had constructed a solid, absorbing documentary utilizing real-life photographs and stock footage of the time. Extras on the disc include a 20-minute 'Making Of' piece, outtakes, posters, biographies, and a commentary by director Borowski. Fascinating stuff for fans of true-life crime.” 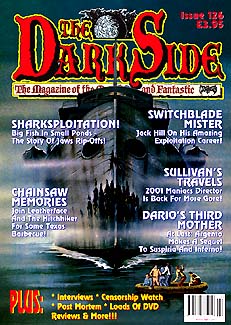 THE DARK SIDE MAGAZINE