Borowski draws a relatively thorough biographical sketch of the Yankee Jack the Ripper through brief reenactments, minimalist animations incorporating original documents from Holmes' life, arrest, and trial, and interviews with experts on forensics, criminal pathology, and the murderer himself. Once known as Herman Mudgett, a New England med student from a strict religious background, Holmes is described as a "prodigy of crime" prone to pulling small-time cons, forgery, and theft well before his unprecedented killing spree.

His most famous criminal feat, covered in the film's meatier first half, involved the construction of a large building in the Chicago suburb of Englewood, known colloquially as "The Castle." Holmes rented out the rooms of The Castle's top floor to unsuspecting tourists visiting the city during the 1893 World's Fair. Some of these guests- the true number has never been determined- became acquainted with the lower levels of The Castle, which housed dungeons, torture chambers, lye pits, acid baths, and a crematorium. Among other nefarious schemes. Holmes made extra money selling the skeletons of his victims to nearby medical colleges!

Perhaps due to a dearth of source material outside of the World's Fair murders, Borowski's depiction of the subsequent years in Holmes' life of crime are far more anemic in detail. Known is that Holmes eventually murdered his assistant Benjamin Pitezel and kidnapped the assistant's three children, crisscrossing the nation before depositing their bodies in Detroit and Toronto, as part of an elaborate attempt to swindle Pitezel's life insurance provider. Leading up to the fiend's capture in Philadelphia, the scheme is otherwise left unexplained past narrator Tony Jay's sinister intimation that "Holmes seemed to be having fun," and while the "Trial of the Century" receives a slightly more in-depth look, the obvious question of motivation is left dangling.

Special features on the H.H. HOLMES DVD include the aforementioned promotional pieces, a deleted scene offering a comprehensive comparison between 19th and 20th century forensics, a short videotaped visit to the present-day englewood locations where Holmes once stalked, and a making-of featurette hosted by the director. Of these, the latter is perhaps the most interesting. Holmes' Castle was destroyed soon after authorities discovered its true nature, and the ways in which Borowski uses simple set design and ingenious camera work to recreate the serial killer's labyrinthine dungeon is an inspiration in independent filmmaking.

Overall, H.H. Holmes is a well-crafted, academic glimpse of a lesser known true crime figure, even with its sporadic lapses in focus, and seems ready-made for a long afterlife on A&E or the Discovery Channel. Even then, Borowski has apparently found himself a niche within a genre, as his next project will cover the early 20th century child-killer/cannibal of New York state, Albert Fish. - Damian Duffy 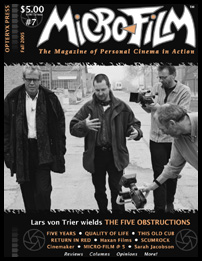