“Serial child killer, pedophile, coprophile, cannibal, sadist, masochist, fanatical Christian, drifter, jilted husband, doting father, house painter. At no time was Albert FIsh employed as a postal worker, but hat's about the only item missing from the resume of one of the early 20th century's most notorious and reviled murderers. Fish preyed upon children and teens throughout the 1920's and the Depression era, stalking most of his victims in the poorest neighbourhoods of New York City, Washington and St. Louis before exiting this world via electric chair at New York's Sing Sing Penitentiary, the prison so nice they named it twice.

John Borowski's new documentary on Fish is strikingly similar to his 2004 effort, H.H. Holmes: America's First Serial Killer (RM#41), and for the most part that's a good thing. Like it's predecessor, it's narrated by actor Tony Jay over a series if stills and dramatic reenactments, also features talking head interviews with popular true crime writer/forensic psychologist Katherine Ramsland, and outlaw artist Joe Coleman, whose painting of Fish ranks among his best known works. Actor Oto Brezina bears a strong resemblance to the killer he plays in the film's recreations, which seem slightly more explicit here than in Borowski's previous film, and the effort is suitably chilling.

The doc also shares its only downfall with its predecessor, with so much footage devoted to stills, a good deal of fat could be trimmed from its 86-minute running time. Extra features on the DVD include multiple interviews, a history of the electric chair, a dissection of Coleman's Fish portrait and more.

Historical serial killer films--primarily low budget ones--have proven profitable in recent years; next time you peruse back issues of Rue Morgue, you'll notice at least one title reviewed in virtually every Cinemacabre section since about 2001, from the good (Gacy) to the OK (Ted Bundy) to the bad (Karla) to the execrable (Nightstalker). And while our appetite for the subject matter shows no sign of waning, Borowski's documentaries are a refreshing change that would certainly be welcome more than every three years.”
-John W. Bowen, Rue Morgue 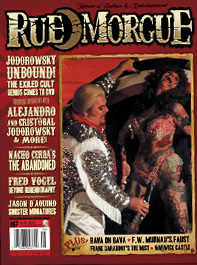