Tired of all the tedious true crime documentaries that flood A&E and Court TV? Writer-director John Borowski has a remedy in H.H. HOLMES: AMERICA'S FIRST SERIAL KILLER (Waterfront Productions) [www.hhholmesthefilm.com], an engrossing profile of demented "arch fiend" H.H. Holmes, who was responsible for a string of late-19th century murders and was also the inspiration for Erik Larson's book The Devil in the White City. It's a supremely twisted tale, that takes Holmes from medical school and general swindling, to building his own three-story torture mansion in the middle of Chicago, complete with sound-proofed rooms, secret gas chambers, an abattoir, and basement crematorium.

When the city hosted the 1893 World's Fair, Holmes took advantage of the event and lured out-of-town visitors to his deadly home - the tourists went in, but they never came out - and H.H.'s grisly story includes multiple lovers, keeping one step ahead of the Pinkertons, and even selling his victims' bones as medical skeletons. The 64-minute film includes numerous photos, newspaper clippings, expert analysis, ominous narration by Tony Jay, and also excerpts from Holmes' autobiography, written while in prison. Borowski doesn't skimp on the ghoulish details, and he also adds b&w dramatic recreations in order to spice up the story, even though the basic facts would've been just as effective (and a little less hokey at times). Still, it's a crackerjack story that makes most modern serial killers look like rank amateurs. 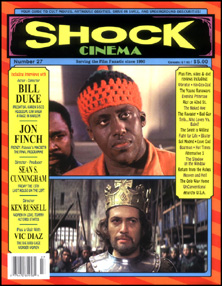