Throughout the 1920s and until his execution at Sing Sing Prison in 1936, Albert Fish was the ultimate cannibalistic serial killer. He may have killed and devoured anywhere from 15 to 100 children. Fish himself claimed that during his life he had devoured a child from every state in the union. At 65 he was the oldest man to have ever been put to death in the electric chair. A creature born out of children's nightmares, or, as one child described him, the Boogie Man, Albert Fish is the subject of this riveting and unsettling documentary by John Borowski, who’d earlier helmed H.H. Holmes: America’s First Serial Killer (VS #53).

Narrated by the late Tony Jay, using archival footage of early New York along with contemporary newspaper clippings, the film presents the gruesome facts surrounding the religious and sexual obsessions of a man (portrayed by Brezina) who from all outward appearances could be anybody's grandpa. Featured in this film is the reading of one of the most disturbing confessions ever put to paper as Fish relates to the mother of one of his child victims, in great, gory detail, how he killed her child and ate her flesh. He also chillingly assures the mother that her daughter “died a virgin.” Forgoing actual recreations of these incidents, Borowski instead takes a more stylistic approach. We see roasts cooking in the oven that just might be a child’s burning flesh; we see a young Albert Fish, who made his living as a painter, painting the walls with what looks like human blood, etc. Very creepy and very effective. Almost as creepy as artist Joe Coleman and his “Odditorium,” where he keeps Fish’s framed confession letter and refers to the killer as a “dark shaman” who had a purpose for being. He also confesses on camera to having stolen the Albert Fish letter due to a secretary's error and says that Fish wanted him to have it. Uh-huh. We also hear true-crime author and Ph.D. Katherine Ramsland’s thoughts regarding Fish's motives and the mindset of other such serial killers.

Definitely a documentary one should not miss, Albert Fish will make you think twice before you let a friendly old person pinch your child's cheek and say, “Oooh, she looks good enough to eat!” If you order from albertfishfilm.com, you can also receive a collector’s X-ray of Albert Fish's abdomen, showing the pins that Fish inserted into himself as part of a ritualistic self-torture. You'll be thinking about this haunting film long after it's over.
-Dwight Kemper, VideoScope 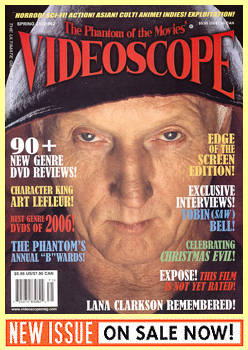